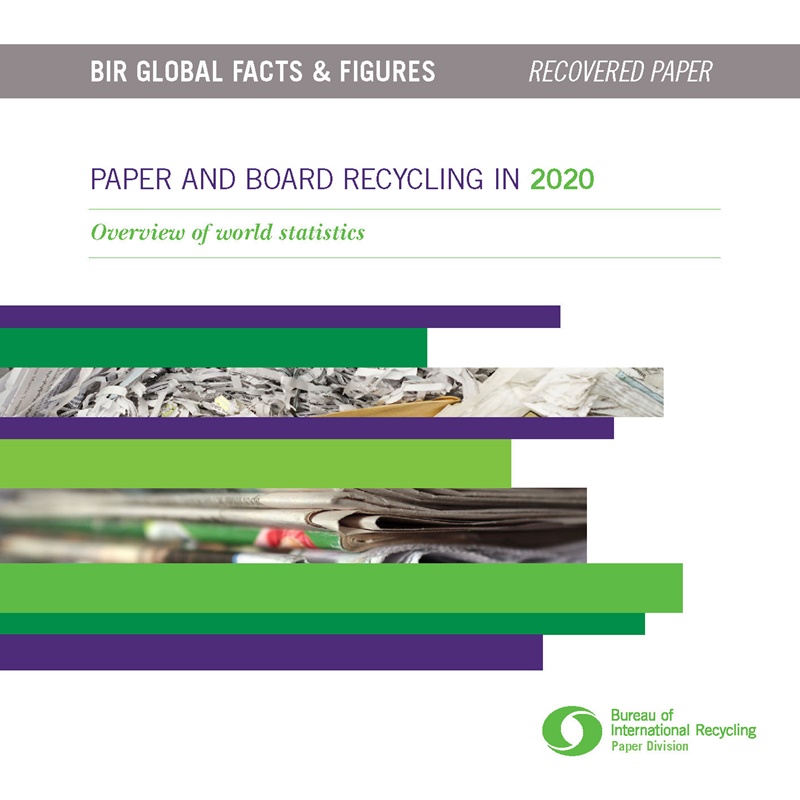 Paper and board recycling in 2020: Overview of world statistics

As with its predecessors, this third edition of the BIR Paper Division’s annual analysis of key recovered fibre data has been compiled with the assistance of the European Recycling Industries’ Confederation (EuRIC). Additional to data input from RISI and CEPI, BIR’s divisional experts have used their own insight and reasoned calculations to quantify the fundamental role of recycled fibre as an environmentally-beneficial component of global paper and board production.

“Even during a global pandemic, the recovered paper industry continued to play its essential role in supplying the world paper and board industry with specification raw material,” observes BIR Paper Division President Francisco Donoso of Spain-based DOLAF Servicios Verdes SL in his introduction to the new report.

Asia incorporated more than 71% of recycled content into its paper and board production in 2020 owing to its leading role as a cardboard producer. Europe achieved an incorporation rate average of more than 56% while the numbers for the USA/Canada and for Latin America were, respectively, 40% and 67%.

As regards international trade in recovered paper, the report’s stand-out statistics include a further slump in China’s imports from around 11 million tonnes in 2019 to little more than 7 million tonnes the following year, well over half of which was provided by the USA. Having been the pre-eminent overseas market for Europe’s recovered fibre exports for many years, China slipped to fifth place in 2020 behind India, Indonesia, Turkey and Vietnam owing to its tightened import controls.

Recovered paper usage “will not achieve its full potential” and the economics of paper and board recycling will be “seriously compromised” without free international trade, the report contends. Pointing in particular to the European Commission’s push for severe limitations on exports of recovered fibre beyond the EU, Mr Donoso adds: “Without the pressure valve of international exports to cope with major surpluses within Europe, the future for the recovered paper industry will look very bleak indeed.”

“Paper and board recycling in 2020: Overview of world statistics” provides data on recovered fibre production, its incorporation into new products and its main trade flows, while also highlighting key paper/board and pulp developments.

“This is a must-read publication not only for those with a direct involvement in recovered fibre but also for those who hold the future of our industry in their hands, including policy-makers and legislators,” comments Mr Donoso. “For those wanting to arrive at a better understanding of what our industry routinely achieves on behalf of the environment and the Circular Economy, then they could do no better than start with this report.”