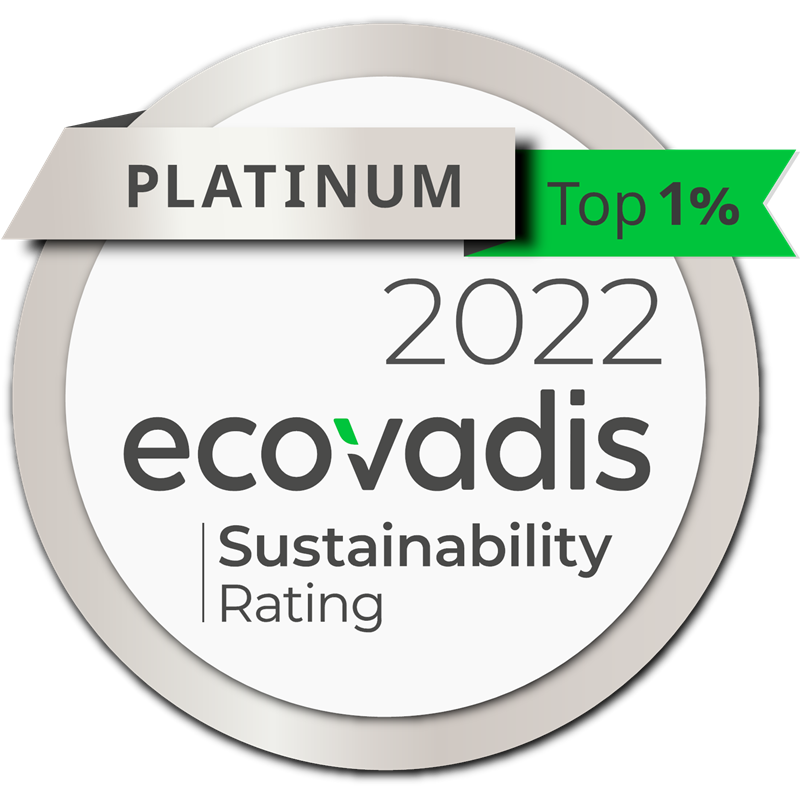 Fedrigoni among sustainability champions: The Group was awarded the Platinum Medal by the international ESG rating agency Ecovadis, which annually examines 75,000 companies of all sizes and from 200 manufacturing sectors around the world, evaluating their operations and management systems from the standpoint of environmental care and social responsibility. This result places the Group in the top 1% of companies in the same industry worldwide for ESG performance.

Fedrigoni, a global player in the production and sale of high value-added specialty papers for packaging and other creative applications, and premium labels and self-adhesive materials, achieved the ambitious score of 85/100, but on environmental impact reduction policies the rating even rose to 100/100. Several factors influenced the latter score: transparent communication of targets and results, including emission reduction, endorsed by the Science Based Target Initiative, water consumption and waste management; a clear action plan to achieve the 2030 targets, and widespread accountability of all managers in the company by tying a significant portion of MBOs1 to the achievement of ESG targets (between 15% and 25% depending on the role).

A long, sometimes tortuous path, aimed at making progress every day, together with all the players in the packaging-self-adhesive-printing supply chain. The numbers demonstrate the relevance for Fedrigoni of ESG issues, which now pervade the entire growth strategy: absolute CO2 emissions dropped by 1.5% by the end of 2021 against a 5% increase in volumes produced (baseline 2019); clean water returned to the environment exceeded the target set for 2030, confirming responsible management of the so-called blue gold as important as ever in this period of extreme drought (97% against 95% target). The company has chosen a concrete and measurable approach that includes a path of continuous, uninterrupted improvement. And indeed, the results as of May 2022 confirm the positive trend: waste recovered from a circular perspective and not sent to landfill has risen to 89% (from 84% at the end of 2021), and suppliers selected according to ESG criteria have risen to 88% (from 81% at the end of 2021), an increase of 100% in the last 12 months (44% in May 2021), moving closer to the 2030 target of 95%.

“If the Gold Medal obtained in 2021 certifies the structured commitment and first good results achieved,” comments Marco Nespolo, CEO of Fedrigoni Group, “the Platinum Rating, with such a high score, shows that the path taken is bearing excellent fruit and places us in the top 1% of the world market with regards to our reference industries. The Platinum Medal represents an important milestone, which is a source of pride for us. However, it is not an end point, but rather an incentive to improve further.”

“We have been investing for 20 years to make our processes, products and relations with our people and the territories in which we operate more and more sustainable,” adds Chiara Medioli Fedrigoni, Chief Sustainability & Communication Officer of Fedrigoni Group, “and in the last two years we have further accelerated our ESG commitment. We are very aware of the challenges the country faces, both in terms of energy and CO2 emissions reduction, and in the use of environmental resources: we work with many international technology partners and two research centers to improve our performance and give both customers and citizens sustainable solutions.”

In the social sphere, the company is committed to creating an increasingly safe and inclusive work environment. One notable achievement concerns workplace injuries, which a careful policy of raising awareness of proper behavior has led to improvements faster than expected: since 2020, in fact, the injuries frequency index has decreased by 35 percent (May 2022), making the 10-year target of -67 percent more than achievable. The 2030 target of 30% women in managerial positions is also likely to be increased, as it already stands at 27% (May 2022).

The company's commitment to its people and host communities also includes concrete actions on biodiversity and human rights issues. On the first front, since 2022 Fedrigoni has been working with the environmental consulting firm Etifor (a spin-off of the University of Padua - Italy) to assess its impact and develop an appropriate mitigation strategy: at the moment, a proximity analysis of paper production facilities has been completed and a study of processes and the supply chain is underway. Safeguarding biodiversity is an issue that the company has considered a priority for years: since 2014, 100% of the cellulose used has been FSC certified, and suppliers are also selected on the basis of the existence of projects to restore and conserve biodiversity in the forests from which they source. Finally, about human rights, over the past year Fedrigoni has defined the set of behaviors to which every person in the Group must strive and has renewed its corporate Code of Ethics, in line with the United Nations’ Guiding Principles on Business and Human Rights, launching an internal awareness campaign toward its 4,500 people. An initial mapping (Human Rights Impact Assessment) was then conducted in 2022 on the risks of potential human rights violations at Fedrigoni's production sites around the world, which will be used to define a subsequent action plan.

1 MBO: Management by Objectives, a variable part of a manager's compensation tied to the achievement of set goals.