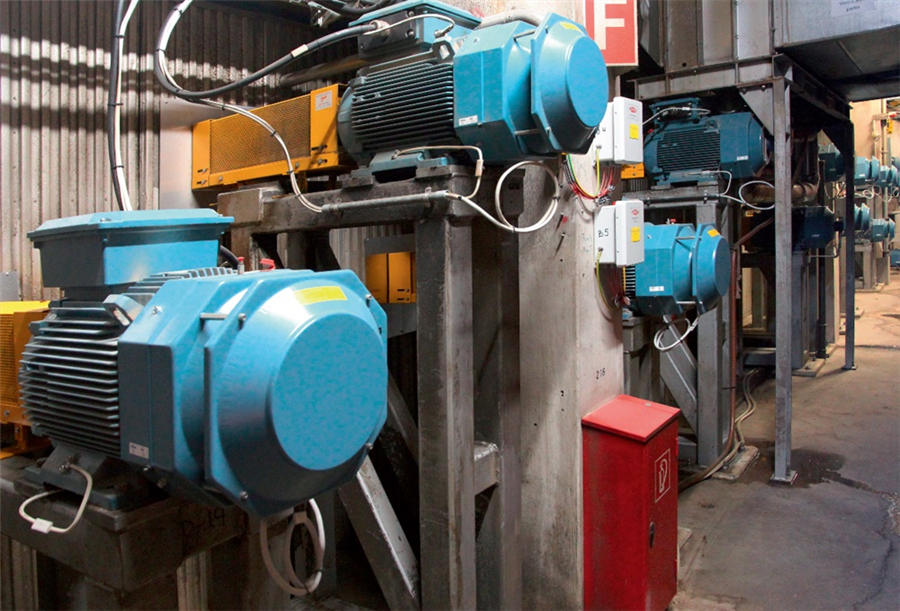 ABB has helped Model Group, a packaging manufacturer headquartered in Switzerland, modernize one of its key paper machines with energy-efficient motors and state-of-the-art variable speed drives (VSDs). The result is increased productivity and reliability, together with a reduction in energy consumption of up to 900,000 kilowatt hours (kWh) a year – equivalent to 200 four-person Swiss households, with a projected payback in less than five years.

Model Group develops, produces, and supplies high-quality packaging made of solid and corrugated cardboard, from simple transport packaging to highly refined chocolate and perfume boxes. At its facility in Weinfelden, Switzerland, Model Group operates two huge paper machines: almost 80 meters long. Powered by dozens of electric motors, the machines operate 24 hours a day, seven days a week to produce the paper used across the group to manufacture some 1,500 million square meters of corrugated board a year.

The production of paper is energy intensive, so as the second paper machine at Weinfelden approached the end of its service life, Model Group was keen to explore upgrade options that would provide a boost in energy efficiency.

Philipp Lenhard, technical manager at the facility, said: “Recycling and energy-efficient production have the highest priority for us - from an ecological as well as an economic point of view. This priority applied to the renewal of the drive systems for paper machine two. The variable speed drives were legacy models that suffered from a lack of spare parts, while the motors dated from 1991 and required an extensive overhaul.

“We were impressed by the upgrade route proposed by ABB’s experts that would enable new motors and drives to be fitted. This avoided the costs involved in overhauling the existing motors while taking advantage of government grants available for energy efficiency improvements.” The modernization project was planned around Model Group’s six-day summer shutdowns in 2019 and 2020. The new equipment was delivered to site, ready for fast-track installation and commissioning.

Philipp Lenhard continues: “The ABB IE4 motors enabled us to access Swiss Federal funding for the project that would have been unavailable if we had used IE3 motors. This grant covered around 32 percent of our total investment. In effect, the upgrade in efficiency rating paid for the motors from the start.”

Delivery and commissioning went exactly as planned, with paper machine two able to start up again in August 2020, quieter and more economical than before. While calculations by Model Group show that the energy efficient motors and drives are saving up to 900,000 kWh a year, there are important additional benefits.

Previously, the 2.5-meter-wide paper web ran through the machine at some 800 meters per minute. Now it runs at 900 meters per minute – a major increase in productivity. Furthermore, the new drive solutions will eventually allow the machine to run at one kilometer per minute when other upgrades are carried out. The motor speed has also been reduced from 1,500 to 1,000 rpm, which has made it possible to optimize or eliminate gears, thereby significantly reducing friction.

The final result is increased production speed, significant energy savings and a projected return on investment (ROI) in less than five years.

Stefan Floeck, Division President for IEC low voltage motors - ABB Motion, said: “The success of this project for Model Group is a perfect illustration of how energy efficiency is not an added business cost. Instead, modernization with the latest energy-efficient motors and drives contributes directly to improved bottom line performance as well as helping reduce carbon emissions.”