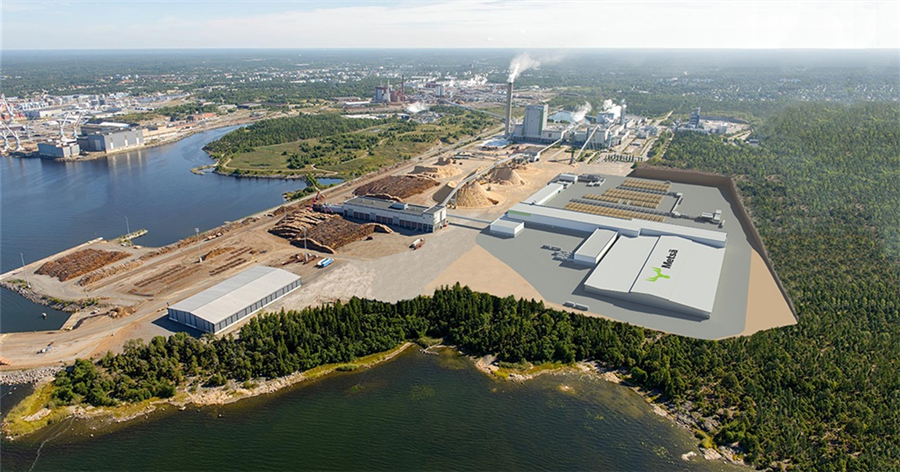 Metsä Fibre, part of Metsä Group, has agreed on the main equipment purchases for the new sawmill to be built in Rauma and the planned bioproduct mill in Kemi. The total value of the agreements is approximately EUR 500 million and their degree of Finnish content 70 per cent. In the spring of 2019, Metsä Group started the pre-engineering for investments totalling roughly EUR 2 billion, including the Rauma sawmill, Kemi bioproduct mill and the first phase of the modernisation of the Husum pulp mill in Sweden. With these investments, Metsä Group meets across the entire forest industry value chain the needs of forest owners and its customers even better than before.

“The implementation of the Rauma sawmill investment, which was decided in late March, has progressed well, as has the planning of the Kemi and Husum projects. In the current situation, impacted by the coronavirus pandemic, we need investments to maintain society’s cash flows and well-being. I’m happy that we were able to achieve a large number of competitive equipment deals with companies that have strong operations in Finland. Our investment projects create well-being on many levels in Finland,” says Ilkka Hämälä, President and CEO of Metsä Group.

Construction of the Rauma sawmill begins in May

The delivery of Rauma’s sawline, which will run at a speed of more than 200 metres per minute, has been agreed on with Veisto Oy. The log sorting as well as the sawmill’s feed and bark processing equipment will be delivered by Nordautomation Oy. The dry sorting and packaging equipment will be delivered by C. Gunnarssons Verkstads AB, and the two green sorting lines as well as the sticking and stacking line by Renholmen AB. The speed on all processing and sorting lines is more than 200 pieces per minute. Heinolan Sahakoneet Oy is supplying the equipment for the drying department. All load transfers in the drying area will be fully automated. The total value of these equipment deliveries is approximately EUR 100 million and the degree of Finnish content 70 per cent.

Production at the world’s most modern sawmill in Rauma, which will cost around EUR 200 million, is meant to start up during the third quarter of 2022. The coronavirus outbreak, however, may have an impact on the schedules. The new unit’s annual production is some 750,000 cubic metres of pine sawn timber, and it will be a global forerunner in terms of its technology and efficiency. For example, using machine vision and artificial intelligence in different stages of the sawing process is a significant new development. Similar technology is not yet in use anywhere in the sawmill industry.

The new sawmill will employ around 100 people directly in Finland and around 500 people across its direct value chain. The sawmill’s employment impact during the construction phase is estimated to be roughly 1,500 person-years. The annual use of logs sourced in Finland is estimated to be around 1.5 million cubic metres. Sawn timber produced by the Rauma sawmill will be sold mainly to Europe and Asia.

A preliminary agreement on the delivery of the key technology and automation for all of the main production lines of the Kemi bioproduct mill has been signed with Valmet, conditional to the final investment decision. The total value of the deliveries comes to EUR 350-400 million and the employment impact of the main equipment production is approximately 800 person-years, of which more than 500 will be carried out in Finland.

A preliminary agreement on the engineering of the construction phase has been singed with AFRY and on the actual construction with Fimpec.

The financing negotiations related to the project continue, as do the efforts to ensure its wood supply, logistics development and the preliminary work of the construction phase, including the demolition of existing buildings and the relocation of operations within the mill area.

The Kemi bioproduct mill would annually produce some 1.5 million tonnes of softwood and hardwood pulp as well as numerous other bioproducts. It would employ around 250 people directly in Finland and a total of approximately 2,500 people across its direct value chain. The mill’s annual use of pulpwood, purchased mainly from Finland, would amount to roughly 7.6 million cubic metres. During the construction phase, the Kemi bioproduct mill’s employment impact is estimated to be nearly 10,000 person-years, of which more than half would be carried out in Kemi. The number of workers working in the mill area over the entire construction phase is estimated to rise to around 15,000. The starting point for the planning of the new bioproduct mill has been a high degree of environmental, energy and materials efficiency. The mill would not use any fossil fuels at all, and its electricity self-sufficiency would be 250 per cent. This would strengthen the already significant position of Metsä Group as an electricity producer based on Finnish renewable fuels.